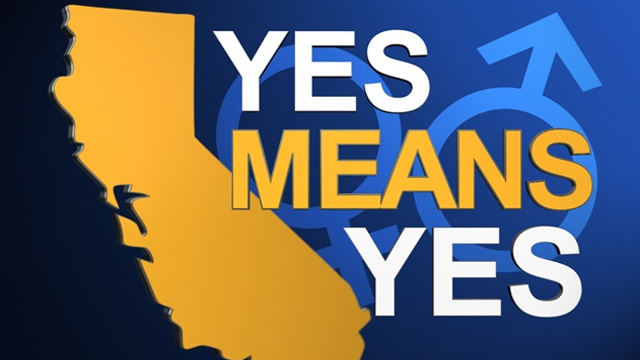 I flinched as I heard Kruiser, Katz and Shlichter delve into the issue of California’s Senate Bill 967 in the latest episode of Tracked and Targeted. Not because I disagreed with their conclusions, but because I could foresee the inevitable public persecution.

California’s Senate Bill 967 was signed into law on Sunday, and it’s a law requiring “unambiguous, enthusiastic and ongoing” consent before sexual conduct on college campuses. As a Swede, I took some extra interest in the passing of this law, since it’s very likely my country will pass such a law on a national level within the next four years.

The Tracked and Targeted crew made some excellent points on why this law is horrendous, but as men they were handicapped in doing so. That is how the world works nowadays. We talk a

bout men as we make decisions that influence the world they live in, but if they dare argue the merits of those decisions, we shriek and claim victimization.

But fret not, dear boys. I have so many cards (minority, woman, single mother – you name it, I’ve got it) and I will now play my hand in order to back up my Ricochet crew.

This law stunts our growth and ruins sex for everyone.

Bad sex happens, and it’s part of becoming a grown-up. The college years are all about finding out who you are, and that includes who you are sexually. Regretting a sexual encounter usually leads to better choices and adapted behavior, and like any experience — good or bad — it will encourage personal responsibility. N

eedless to say, this new consent law will also create a culture of sexual angst. Having to say yes — or ask every five minutes if the girl is still ok with what is going on, —does not make for a healthy or pleasurable sexual experience, nor does it lessen the gender gap the liberal brain trust behind this law is claiming to want to overcome.

This law reeks of prejudice

I am the mother of two young boys, and the idea that they are somehow dormant rapists makes me want to stab someone in the eye (see, I’m much more violent than most men). Creating corrective legislation to control what is seen as their inherently sick sexuality is no better than racist laws from times when we saw black people as savages or laws that forced sterilization of the mentally handicapped. Men are not animals, and women are not passive canvases for male sexuality. We are equals, but this law is telling us that we are not — and it is promoting the idea that male sexuality is “evil” whereas female sexuality is “good”. The purity stigma is an albatross around a woman’s neck, not only

because it will hinder her from developing a relaxed and honest approach to her sexuality, but also because it is a form of built-in slut-shaming for any woman who is less black and white and more shades of grey (much pun intended). As we debate this law, we must remember not to only focus on the labeling of men as possible rapists, but also on the notion of all women as pure, libido-less angels — and how this modern chastity belt pushes both genders back in to boxes we were supposed to have escaped many decades ago.

This law is anti-woman

As far as I know, the basic premise behind this feminist ideology is to celebrate choice and create a world where I am not judged on the basis of my gender. Yet feminists keep insisting on pointing out that I am a woman first, legislating me into my gender and making assumptions based on it. This law makes a victim ou

t of women. It demonizes both female and male sexuality and pits us against each other instead of creating the safe zone it claims to promote. As a woman, I should be able to have sex, make mistakes, and take responsibility for my actions to just as great an extent as a man. If I have a law making me say yes every five minutes, it not only means I am doomed to have crappy sex. More importantly, however, it means the justice system does not trust me as a woman to know what I want or be responsible for my own decisions. We are back to separate but equal, but this time the inequality is touted by feminists trying to find legal ways to avoid the fact that freedom has a bad aftertaste of personal responsibility. Women are not victims of male sexuality. We are not passive objects. We want, we lust, and we have basic sexual needs like any red-blooded man. The 967-bill is not empowering me; it is saying that, as a woman, I have so little power that the government has to step in to safeguard my vagina. How is that a feminist thought? In what world is that progressive?

When I took my my first feminist class (yes, I used to do that), I was told that feminism was all about being an individual (and not a woman) first. That was all I ever wanted, and all I still want — to be an individual, with all the freedoms and responsibilities that come with that. Somewhere in my early 20s I realized that feminism had very little to do with individual equality and very much to do with collective guilt, and thus I chose another path. I grew up, I learned from my mistakes, and thanked G-d for the experiences that lead me there.

The 967-bill and others like it will teach our sons and daughters that they cannot be trusted with their own minds or their own bodies, and that bureaucracy has made its way into our bedr

ooms, demanding pleasure-waivers before we even get to 2nd base. Ironically, it is the same crowd passing this bill that were demanding that the government stay out of their genitalia when it comes to reproduction. They say they want equality. Equality on their terms, however, means a society where some are more equal than others.

This law creates a false sense of security

The signal being sent by this law is troublesome in many ways. First of all, it is saying that bureaucracy can protect you from rape. This is not the case, unfortunately. Signing a piece of paper will not stop a rapist, male or female, from acting. It will only stop normal, curious individuals from having sex out of fear of b

eing falsely accused. Secondly, it will create a second-tier legal system within the academic community. If, G-d forbid, someone is sexually assaulted, it should be handled by the police and the courts — and when this is done one should be considered innocent until proven guilty, not guilty until able to produce the right documentation.

As I went off to college, my father told me that life is hard and that I should always behave like a lady and, if needed, fight like a man. He couldn’t give that advice today without being called an oppressive patriarch — but for me it became a mantra that I live by to this day. Life is not easy. Terrible things happen and bad people will come your way. Your success in life will be determined not by how you handle the rose-colored moments, but by h

ow you respond to the dark depths of the abyss. You can’t legislate away pain, heartache, or mistakes. Sure, it is a human instinct to want to pass laws to protect you and those you love from the unknown; from that one sick individual who will try to cause you harm. Attempting to legislate that away, however, will create a world where you are no more safe, but where everyone is much less free.

This article was first published on Ricochet