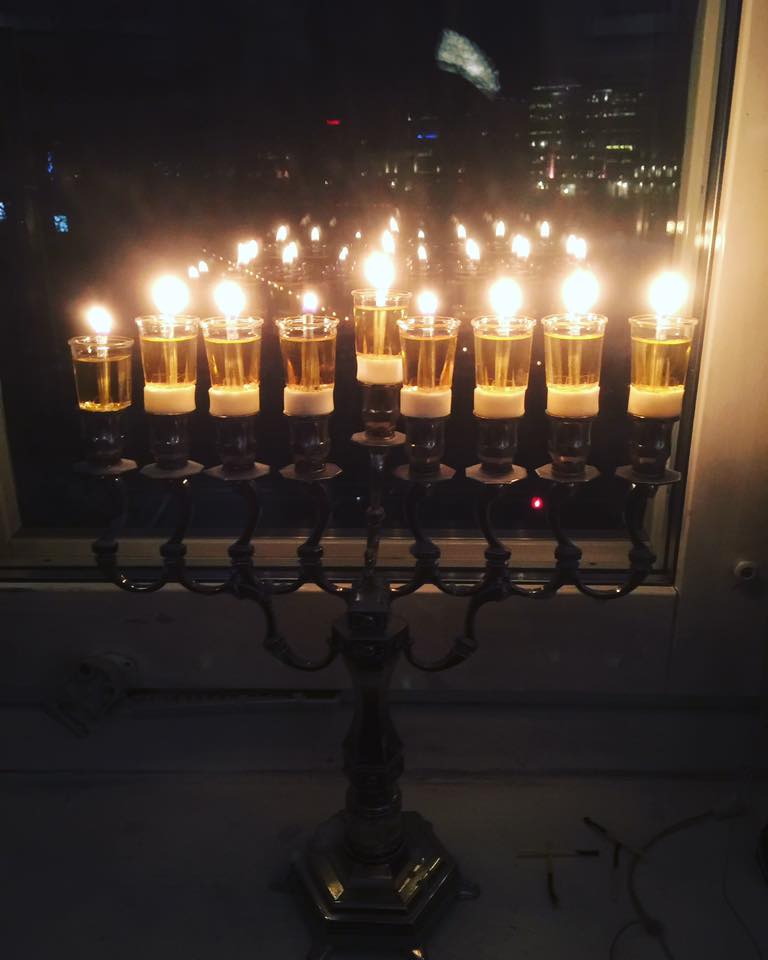 As I dropped off my 6-year-old son at school the other day, I was called aside by his teacher. Apparently there had been an “incident”, as she put it, when my son had refused to participate in the annual Saint Lucia celebration; him saying that “we don’t do stuff like that in my family”. He had, after some negotiation, agreed to sit in the room with his peers as long as he could wear his blazer, his nice shirt, and his new tie and did not have to dress up in Christmas gear like the other kids.

Hearing this, I was proud and amazed at the ease with which my son had affirmed his identity. At 6, he knows who he is and who he is not — and he was willing to stand up to authority in order to stay true to that conviction.

We are approaching Hanukkah. At this time last year, I took some unorthodox action, attempting to change the status quo. I filed for asylum in my own country, citing religious persecution, in order to fight the growing anti-Semitism and demand action from my government. No such action came, nor did it garner any significant reaction from the Jewish community itself.

In the past 12 months, Europe has seen not a mere rise in anti-Semitism, but an explosion in overt hatred: murders in Belgium and France; riots, torched synagogues, and defaced Holocaust memorial sites; and all this alongside a dramatic spike in hate crimes all over the continent. Jews are once again being denied entrance to restaurants, service in stores, and treatment in hospitals. They are even losing their livelihoods for no other reason than that they are Jews.

My asylum case coincided not only with Hanukkah, but also with the 70th anniversary of the Warsaw ghetto uprising in 1943. As I ended up reading both narratives simultaneously I saw one clue to our demise running through these stories of rebellion.

The Germans had planned to destroy the Warsaw ghetto in three days, but the Jewish resistance held out for more than a month. Even after the end of the uprising on May 16, 1943, individual Jews hid out in the ruins of the ghetto and continued attacking Nazi soldiers as they patrolled the area. More than 56,000 Jews from the Warsaw ghetto were ultimately killed, but that symbolic uprising inspired others from Bialystok to Treblinka and created hope among the dying in German-occupied Europe.

The Jewish resistance in the Warsaw Ghetto was fought for and through Jewish dignity. The fought even when they knew they were outnumbered, because they understood that, while the Nazis would ultimately kill them, they still had the choice not to enable their enemy to humiliate them. Perhaps most importantly — unlike the Jews of today — they chose to do so without the backdrop of the Holocaust.

We know what happened. We have already been to the gates of hell. Yet there is no Jewish resistance to the pogroms of our time. Perhaps the reason why lies within that statement itself.

Jewish life in Europe after the Holocaust is often described as a rebirth, but with that the Shoah became our ground zero and our main point of reference as a people, creating a litmus test that deems everything short of death camps as acceptable. If we say that we were reborn, then we accept that what came before was a death and not one of history’s most stunning acts of survival. By the focus on Holocaust remembrance we have engaged in a dangerous forgetfulness that includes most of our history and all of our greatness.

There is no lack of death and destruction in Jewish history, but these are now hailed as examples of Jewish survival. We gather around the table to tell stories of how they tried to kill us, and how we lived; tales of slavery and triumphant freedom. In the case of the Holocaust, the Jews of Europe remember only death, and the days of remembrance focus not on the freedom we took but the freedom we were given. For 70 years we have been uttering the words ‘never again’ as if it was an all-encompassing incantation. While using the Holocaust as the sole comparison, the new and evolved forms of anti-Semitism have been flying well beneath the radar.

Forty men and women from the Treblinka rebellion survived the war, hiding in the woods after fighting the SS guards while on the brink of death. Seventeen Nazi soldiers were killed by the Jewish resistance in the Warsaw ghetto. During the Auschwitz Sonderkommando revolt in 1944 the prisoners managed to kill 77 Nazis after blowing up a crematorium and attacking the soldiers with makeshift weapons.

These are a few of many stories of Jewish dignity and amazing survival during the Holocaust. These are stories to be told around a table with our children, and they should be told as part of a long history of trials and triumph.

Redefining our relationship to the Shoah is not forgetting, nor is it forgiving. It’s merely choosing not to be defined by the evils of others, but by the strength of ourselves. If we choose to tell stories of our heroes instead of the stories of our captors it does not lessen their responsibility, but it frees us from the legacy they tried to bestow upon us and helps connect us to our own.

It’s a known fact that victims of violence and trauma often stay in that day they were hurt, recreating the moment and thus becoming revictimized over and over again. I fear that the Jews of Europe are in this state of arrested development, unable to mount a resistance to persecution as they are so focused on death that everything resembling survival passes as life.

In a few days, my sons will help me light that first candle and we will remember those who fought for our right to be who we are. We will honor the losses but revel in the victories that were, as we prepare for those to come.

I believe that, while we may not have a future in Europe, we do have a say in our demise. By releasing the bonds of the Shoah, rising up and not enabling further humiliation, we can leave not as clouds or ashes but as doves. If the heroes of Warsaw, Czestochowa, and Treblinka taught us anything, it’s that there is value in fighting even a losing battle — and that Jewish dignity and honor will still matter long after we are gone.