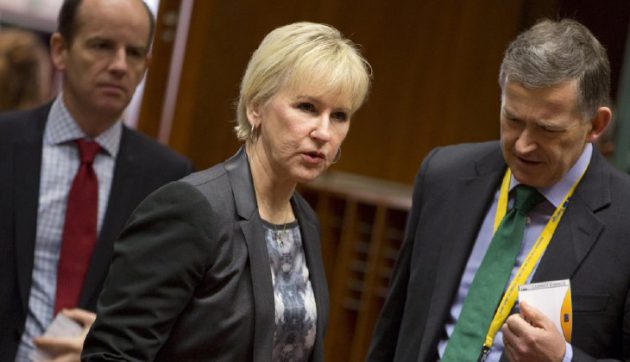 “Sweden is needed in the UN Security Council because of our credibility on development issues and the work we do for human rights. Sweden speaks with integrity, without a hidden agenda, and therefore our presence on the Security Council can make a big difference for the good of the world.”

Swedish Foreign Minister Margot Wallstrom writes these words in a recently published op-ed as part of the Swedish bid for a temporary seat on the council during 2017 and 2018, going up against Italy and The Netherlands, the other two EU member states who have thrown their hats in the ring.

Since the inauguration of the Socialist alliance-government in 2014, Prime Minister Stefan Lofven and his cabinet have worked furiously to establish themselves as world actors, acting out through foreign policy, but their methods have been seemingly random in nature, from the foreign minister starting a fight with Saudia Arabia over feminism and having to be bailed out by the King for condemning Israel for “extrajudicial executions” as it attempted to protect its citizens from terrorist killers.

The first action the Socialist government took, before even passing a comprehensive budget, was recognizing Palestine, becoming the first ever EU country to do so. Sweden has a long-standing relationship to the PA, and the Social Democratic party refers to Fatah as its “dear brothers” in several official texts and is currently handing them $180 million yearly in foreign aid, money that helps finance crimes against both their own and other people.

But this is not the only way in which Sweden engages with murky regimes, as shown by its booming export industry. The Swedish government is currently exporting weapons to 26 countries that according to Freedom House are dictatorships, including but not limited to Oman, Algeria, Brunei, Thailand, United Arab Emirates, Pakistan, Kuwait, Egypt and Bahrain, something that does not quite jibe with the fact that it also offers up 80,000 Swedish solders to peacekeeping missions for conflicts involving some of those very same states. The military efforts alone are costing the tiny Northern kingdom 100 million USD a year, and that is not counting the considerable hike in foreign aid given to African and Arab countries in order to shore up their loyalty to Sweden within the Security Council for any future vote.

So the question is, why is Sweden so furiously seeking this chair, paying for it with both blood and treasure? Foreign Minister Wallstrom said in her op-ed that Sweden’s strength is not having a “hidden agenda,” but perhaps the real advantage is the open one they adopted as soon as the ballots were in.

Sweden is not relevant in the real world, nor will it ever be. So what the government is doing now — choosing to focus on paper dragons and made up-entities — is somewhat of a brilliant move. The Middle East is the issue of the day, the year and the century, and as such Sweden wants a piece of the peace-making pie. Tying one’s fate to Palestine ensures never having to actually act or make real-world decisions, and knowing that makes the lust for a seat at the UN-table all the more logical and shrewd. The UN Security Council is an impotent colossus, each member state blocking the other to prevent any action or force. What is left is prestige, prestige and hollow legacy, not unlike the equally costly process of an Olympic hosting gig.

In her op-ed, Foreign Minister Wallström writes that Sweden wants a “platform for our values” and I believe that she is speaking the truth. She wants the platform, not a launchpad, to do nothing as everyone watches in awe. That is the UN, and it is Sweden, in a sad and perfect nutshell: Spending $700 million to get invited to the party, just to stand in a corner watching your shoes, praying no one will ask you to dance.