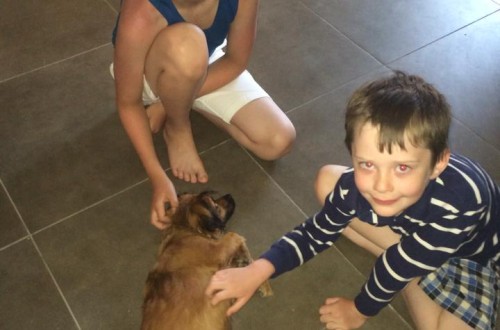 I really thought I knew.

I mean, I had written about it, raised hell, and described it to the world. During Operation Pillar of Defense, I held a rally in support of Israel and gave a passionate speech: “15 seconds,” I said, ’15 seconds to make sure that you and the people you love are safe”. Imagine the terror, imagine the fear, and imagine not knowing the outcome. And I thought I knew — because I had seen it on YouTube, because I had read about it, and because I had spoken to those who lived it. How much more could there be to it? Turns out quite a lot more.

A week ago, I boarded a plane to Israel with my two sons. It was their first visit, and the excitement was palpable. We had rented a small house in TLV, just between the beach and Shuk HaCarmel, and for five straight days my kids called every day the best of their lives.

I was preparing dinner on the eve of the sixth day, waiting for my friends to arrive for one last night of food, wine, and talking all night. My children were sitting at the table watching a movie. Then I heard the sound — like the entire city was wailing with pain. The loudness of it is so frightening that it takes a few seconds before I even understand what I am hearing.

The room is cool — or maybe it’s just me shaking with chills. Children are sitting on the floor. A young man is on the phone with his mother. My own children are quiet and the oldest is fighting back tears, watching my face as to see how scared he is supposed to be. I am just about to try and tell them something when I hear the boom. It’s so much louder than I had expected. I feel it in the floor, the impact traveling through my entire body. There’s a young man nervously laughing. He’s one of those guys I’ve seen at the beach, flirting with girls and wrestling his friends in some ancient macho display. I watch his face and see that this is still someone’s child. He is scared but he can’t show it. I am too — and I can’t either. I know I have to keep it together for my children. I know I need to have a plan. We leave the shelter after about 15 minutes. My children are talking, but I can’t hear them. I am trying so hard to figure out what has just happened and what it means for the hours to come. Fortunately, I’m not allowed to indulge that neurosis for too long. Soon my garden is full of friends. We hug and laugh and go on with our lives just as too many in Israel have to do all too often.

It’s one of the strangest nights I have ever experienced. Now and then we hear blasts, stop to check our phones, and relay our position and status via various forms of social media — then we grab another drink and tell another story. My friend gets a phone call. Her son is being called into service. There’s a shadow running across her face and I want to hug her but I am not sure that I should. She knows this life — and her son does too. She is the strongest woman I know. She is a fighter and a survivor and she chose the life that her son is now being sent to defend. She must hurt, but she doesn’t show it. So I don’t hug her, but I let her finish her story, pretending that this was somehow normal in any imaginable way. There was no sleep that night. I stayed up, watching my children sleep next to me, frantically checking the news. We’re supposed to get on a plane back to Sweden the next day, but at this point I just don’t know anything apart from the fact that we’re safe right here, right now.

At 8 AM the next morning, I was fully packed and ready to leave. The kids and I were having breakfast, waiting for the cab when the siren went off again. We ran into the shelter across the street. The boys were weirdly ready for it that time. I was too, with the bag ready to go, standing by the door. The kids found a dog to play with and somehow they made it into playtime while I flinched at every loud boom that followed. We went straight from the bomb shelter to the airport. I was upside down and inside out and all I could think was that I shouldn’t be leaving. Not now, not ever. This is my home and leaving in the midst of crisis felt like ripping my heart out piece by piece.

I thought I knew but I didn’t. I thought I had felt fear but I hadn’t. I had 15 seconds to grab my children and get to safety. I felt the fear, I knew the terror — and I didn’t know the outcome. When I got back to Sweden and put my kids to bed I went out to the balcony, sipping on a glass of wine. Suddenly there’s a boom, and I flinch, spilling the wine all over myself. A child across the courtyard had thrown a box of toys from her balcony and now she was looking at me, startled by my reaction.

And for the first time since all of this happened, I cried.

I cried for my children having to go through that. I cried for having left my true home in its time of need. I cried for my brothers and sisters, still there, still grabbing their kids by the hand to find safety in less than 15 seconds.

When we got off the flight to Sweden the first words out of my youngest son’s mouth was, “Mom, I miss Israel, when can we go back?’ And I knew we would be ok. Their memory of the first trip to our homeland would not be the shelter or the siren. It would be how they walked around feeling normal and accepted as Jewish kids; it would be the smoothies at the shuk; playing in the waves in Tel Aviv and petting a cute dog in what happened to be a bomb shelter on Daniel Street. We will all be ok. Because the strength of Israel is not only its army, it’s the people, making a life and building a world where others would surely crumble. It’s the love and the strength and the will to survive, embedded in our very core.

I thought I knew, but I didn’t — and now I know so much more. Yes, I know the fear and the panic, but I also know that, while I was scared for a while in Israel, I am frightened in Sweden all the time. Israel is home, and it is the only place I want to be now, in good times and bad times and in all the times in between. In its darkest time, it showed me and my sons more love, humor, and compassion than they have ever seen in their “peaceful” place of birth.

So yeah, I know now. Not just the terror and panic part, but also that there is no way my people are not going to be OK.