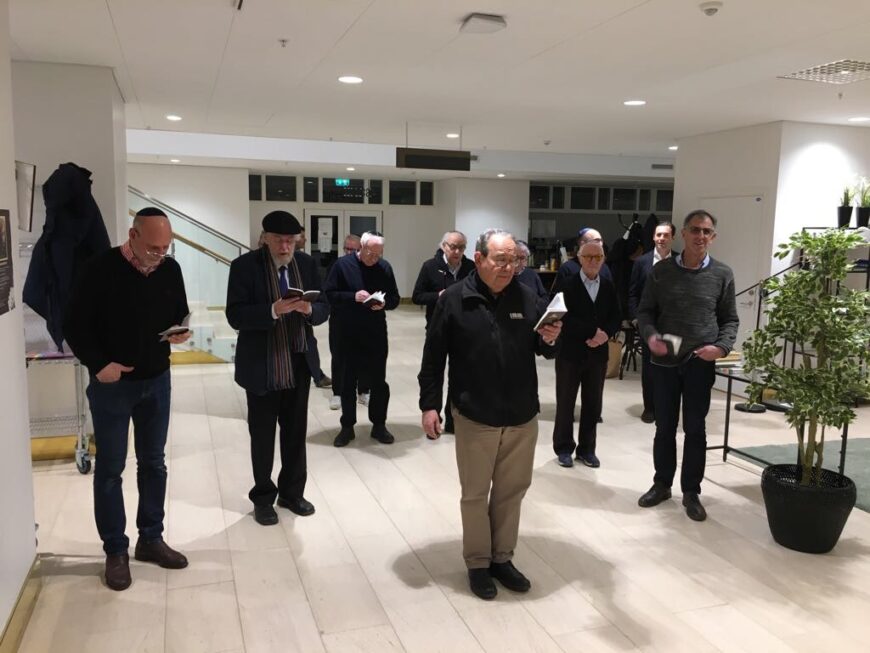 There are 11 people around the table in the small south-side apartment. It’s warm and loud and smells of fragrant kubbeh. Somewhere in the other room, a child has discovered the magic of her own feet. It is home to us, to so many of us, the place that we go after Shabbat services and the radically un-Swedish interior stands in stark contrast to the opaque calm that dominates outside. Most Swedes would never see these scenes or know these people that I call family but we belong here just as they do, we play a role in the larger society and in some sense save it from itself, our antiquated ways and deeply rooted rituals balancing out the modernity and ennui of contemporary life.

I have spent the better part of five years trying to make the case for our survival, speaking of and writing about the life of European Jews. At first I got little more than a courteous nod, and now, after terror and totalitarianism has reared its many heads, the response to our plight is an immediate call to leave and stay gone forever. Perhaps I have failed to capture what it is I’m fighting for in a clear and snappy sentence and perhaps that is why the right to remain is not perceived as a human right for us Jews, once the right to return has given and defined. Or perhaps it is one of those things that cannot be captured in words but rather needs to be felt through experiences, and those are unavailable to many and of too little interest to most. So we are locked into an either-or, where we are somehow expected to stay and assimilate or, if our Jewishness persists, leave for Israel and be happy with our lot.

But there is more. There is this. Us. The 11 people at this table, hearing the kiddush, singing and eating and praying together, and we have every right to be here if that is what we choose to do, being a integral part of a society that is nothing like us. The debate has been focused on the negative, the pain and the plight, and I, too, have been guilty of trying to achieve understanding by telling the worst scenario and citing statistics of crimes, horror and hate. Those things matter, but I may have come further if I had told the stories that matter even more.

Later that same day, I go to my friend Isidor’s house to attend his wife’s yahrzeit and to lend a helping hand. An hour later, there’s a prayer service in his living room, praying in one ancient voice, and I stand to the side just watching the scene and wishing I could capture what it is to me and why this deserves to be preserved.

European Jewish life is its own thing, our very own strain of Yiddishkeit with a tapestry of memories and meaning that we only share between ourselves. We walk the line between soul and society, purpose and practice, and the way we do this is a testament to the strength of who and what we are.

Isidor is telling jokes in Yiddish and though mine is quite rusty, I can tell that he works blue. We are eating gefilte fish from his grandmother’s recipe and drinking l’chaims made on traditional Swedish spices and nothing could more exquisitely describe the gorgeous complexity of our Swedish-Jewish lives. There are five countries and backgrounds represented at this table and so many untold stories folded and hidden beneath our mother tongue. We are not facts on the ground or mere statistics but people with pasts and futures that we should be allowed to master on our own.

I wish you could have been there, I really, really do. I wish all those who tell us to leave or who minimize the loss of freedom in our lives could have experienced the beauty of our joy and of our struggle. The right of return can never replace the right to remain, and both should hold a place in the Jewish psyche on the list of priorities of anyone who cares about our people’s fate.

The men who came to pray and to honor Isidor’s wife took time out of their lives to tend to not only him, but to our rituals, and that is why we are family and why we will remain. We show up for each other, be it in synagogues or crowded apartments or a memorial prayer service for a loved one or a brother we don’t know. We show up for each other because we all know this life and we all walk this line, as European Jews in a time and a place that urges us to be either extinct or irrelevant.

But we won’t be, not just yet, not as long as there is life and breath within us. We show up for one another, and I expect the world to show up for us, fighting for our right to Jewish life and not merely Jewish survival.

This article was first published in Israel Hayom